Angela is the sister God gave me when I was all grown up.  We have been best friends for over 35 years.  Our husbands taught together at two Christian schools.  We were next door neighbors for 14 years and our kids all played together.

We call ourselves Lucy and Ethel because of the crazy adventures we’ve taken together. A little over a year ago, Angie went with me to the RV Show in Pomona when I was starting to look at travel trailers. 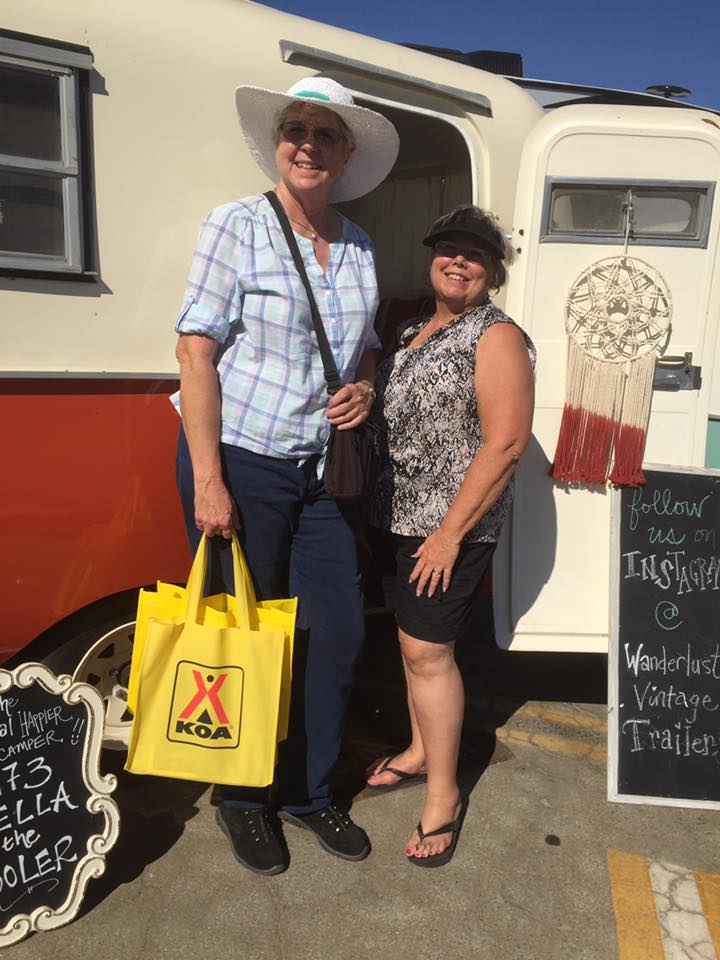 Recently, she flew to NC and stayed with me for a week.

Our first stop was at the home of Angela’s cousin, Danny near Canton, NC.  We parked the trailer at his home for a few nights and enjoyed Thanksgiving dinner with his family.

Danny lives on property that Angela’s great grandfather, a Confederate soldier, obtained after the Civil War.  There are still some old buildings on the site of the original homestead.  Nearby is a cemetery where Angela’s great grandparents are laid to rest. 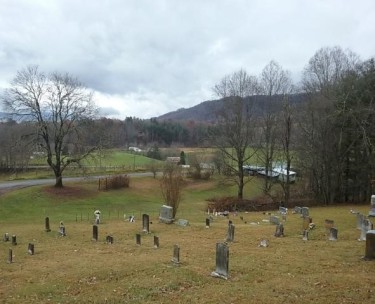 One day we toured The Biltmore Estate in Asheville, the largest privately owned home in the US.  Built in 1895, it was elaborately decorated for Christmas. 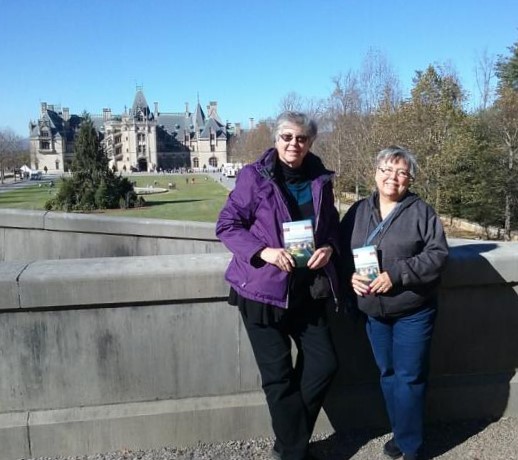 Later, we drove to The Grove Park Inn where we had been told there was a National Gingerbread House Competition.  As we pulled up near the parking lot, a woman was stopping each car and speaking to the driver.  I told her we wanted to see the gingerbread houses.  She said we had to have dinner reservations at the hotel in order to see the houses, and that there was no parking available.  We pulled into the parking lot to turn around and Angie said something about trying to get in anyway.   Ahead of us was a friendly-looking parking lot attendant.  We asked him about the gingerbread houses, and he informed us that we could park in the multi-story hotel parking structure, so we did!  We made our way up to the 8th floor, got off the elevator and found ourselves in a hotel service corridor.  We didn’t know where to go, but straight ahead of us was a door marked STAFF ONLY.

So of course, Angie opened it and we went right in.  Suddenly we were in the busy hotel kitchen!  We got some funny looks from the staff but just kept walking until we came out into a large banquet room filled with guests enjoying the holiday buffet.

Soon we saw the first of several displays of gingerbread houses that were placed throughout the hotel.  The entries must be completely edible, except for the base, and 75% has to be gingerbread.  They can be any shape, not just houses. 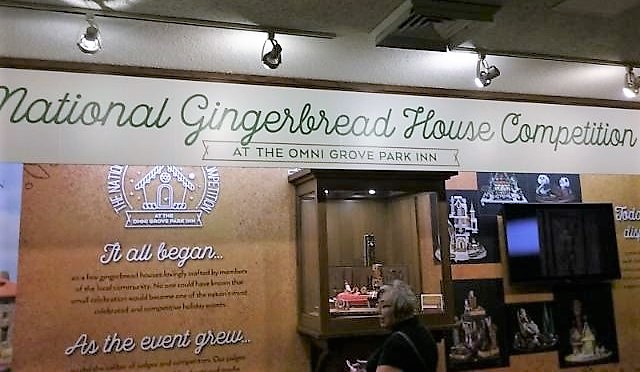 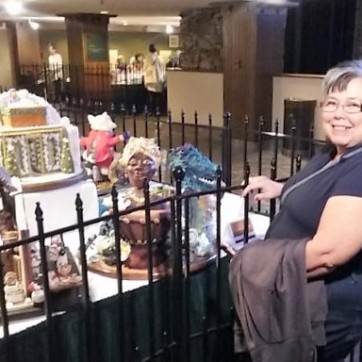 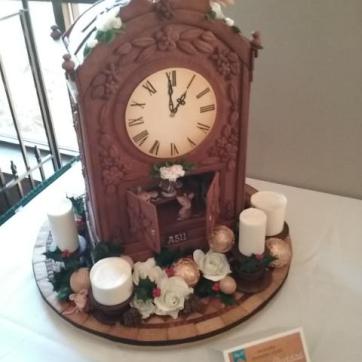 After viewing several displays and watching a video about the winning entry (Gearing Up for Christmas with the pink racer), we settled into a couple of rocking chairs on an upper floor to watch the sunset. 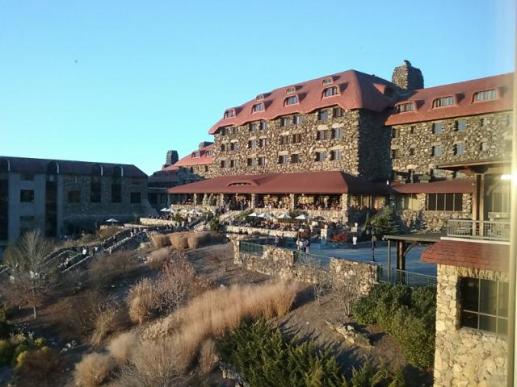 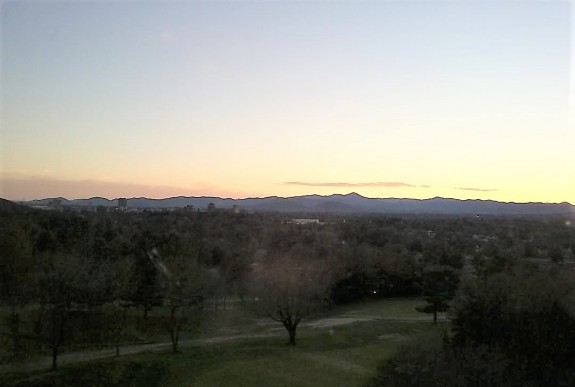 I told Angie I was NOT going back through the kitchen, and eventually we found a legitimate way back to the parking garage!

A few days later we stayed with Angie’s former co-worker who retired and moved to Tennessee last year.  We moved into Judy’s house for a couple days.  It was nice to sleep in real beds, enjoy plenty of hot water and watch Hallmark Christmas movies.  Judy took us all around her beautiful lakeside community.  We saw deer in her back yard, and she fed us like royalty.  The day we left, there was a light dusting of snow in the morning, but the roads were clear as we made our way to Nashville. 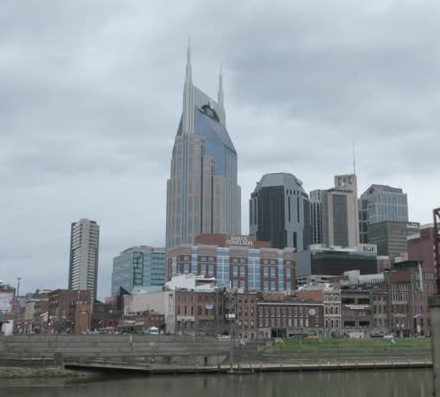 After setting up in our campground, we drove around the grounds of The Grand Ole Opry.   Stopping at Will Call, we picked up our tickets for the next day’s Backstage Tour.  The Opry gift shop was filled with all things country music. 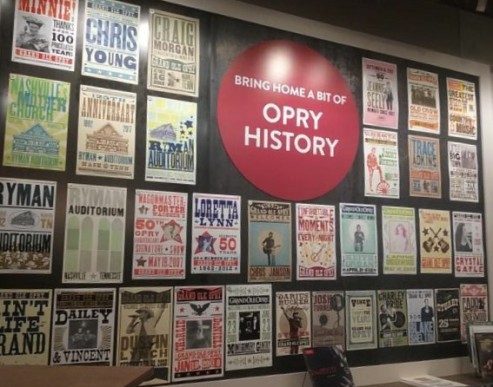 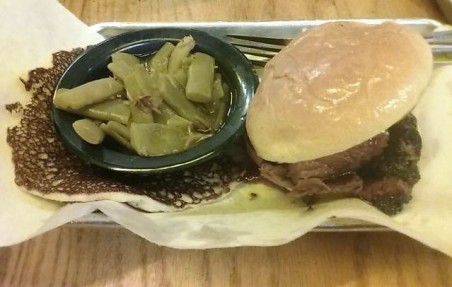 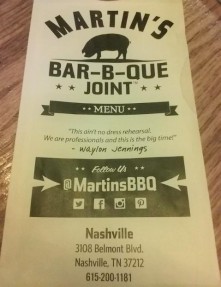 The next morning, I discovered that my outside water hose had frozen in the 24 degree temperature overnight.  It was hard getting the frozen hose off the frozen faucet with my frozen fingers and then hitching up the trailer.  I was very glad we had good heat inside so I could thaw out.  While Angie was getting ready, I said, “We need propane.  I’m going to go up to the camp store and get some.”   So, completely forgetting that I had already hooked up the trailer, I pulled out of the site and drove to propane location.  One of the campground workers ran toward my car, waving his arms and said, “You’re dragging a cord.”  I looked out, saw my trailer behind me (!) and my electrical cord bouncing along.  I stopped the car, rushed back to the trailer and discovered Angie laughing uncontrollably.  She had just rescued my coffee maker and saved it from crashing to the floor.  Oh my.  It was a total rookie mistake and could have been a lot worse.  After I got the propane, we went back to the campsite, hooked to the electricity again and finished getting ourselves ready for the day.  Embarrassing.

Despite the crazy beginning to our day, we enjoyed the Backstage Tour of The Grand Ole Opry and lunch afterward at the nearby Opry Mills Mall.  I have to admit that I don’t know much about country music.  The tour guide kept mentioning names of performers that everyone else recognized.  I just smiled and nodded.

That afternoon we drove to Memphis and again camped in temperatures that dipped below freezing at night.  This time, I didn’t hook up the water hose!  The next morning, we drove to Elvis’ Graceland.  His home is pretty much the way it was when he died over 40 years ago and contains lots of interesting memorabilia and facts about his life.  A separate building houses some of his cars and costumes. 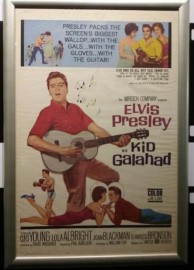 We ate at Gladys’ Diner, named for Elvis’ mom.  A feature on their menu is the Grilled Peanut Butter and Banana sandwich, a favorite of Elvis. 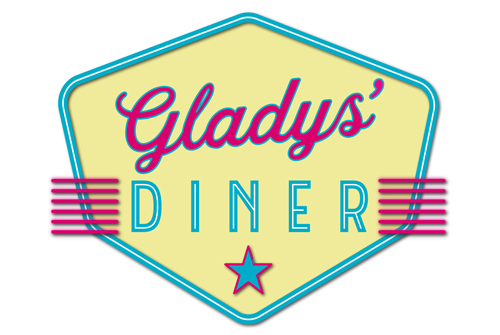 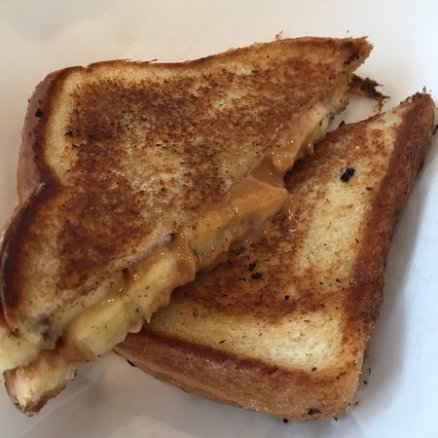 Later that day, we drove to Little Rock and settled in to an RV park along the Arkansas River.   At a Kohl’s store, Angie bought a top to wear on the plane ride home.  Many of her clothes have sparkles or sequins, and when she flew to North Carolina the week before, she set off a bunch of alarms at the airport TSA checkpoint!

The next morning, we hugged goodbye at the Little Rock airport.  What a wonderful gift to have my BFF with me for a week and another Lucy and Ethel adventure to remember! 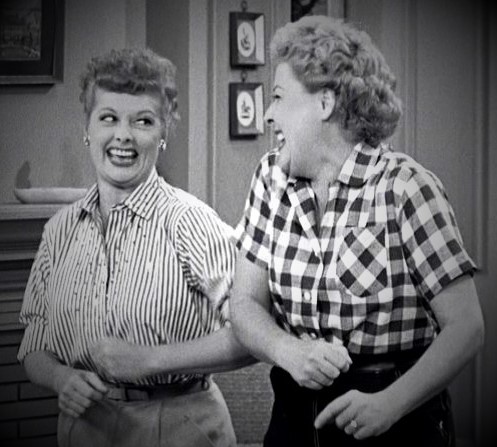